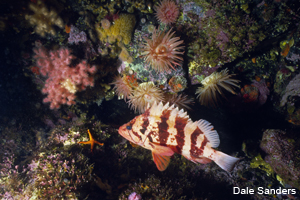 There are 37 species of rockfish in B.C.1 and the fishery provides jobs and important economic benefits to the region. Rockfish Conservation Areas (RCAs) are designated by Fisheries and Oceans Canada (DFO) to help protect and restore declining rockfish populations1. Rockfish are long-lived (up to 100 years) and do not reproduce until they are at least 10 years old2. It is important to set aside refuges where fish have a chance to grow and reproduce. Once the fish successfully reproduce, the population has a chance to recover, spilling over into surrounding areas – often important fishing grounds2.

Although rockfish that ingested oil after the Exxon Valdez spill were found dead throughout Prince William Sound, studies have not directly linked oil spills with declines in rockfish numbers3. However, since Rockfish Conservation Areas are meant to protect rockfish, it does not make sense to put these sensitive areas at risk to oil spills from tanker traffic.

Data Source: The boundaries of the Rockfish Conservation Areas were downloaded from Fisheries and Oceans Canada’s spatial data holdings4. The boundaries of a few sites were simplified to facilitate display in Google Earth but the area covered by each RCA was not altered. RCAs can be found coast wide but only those within the map study area on the North and Central Coast of British Columbia are displayed here.