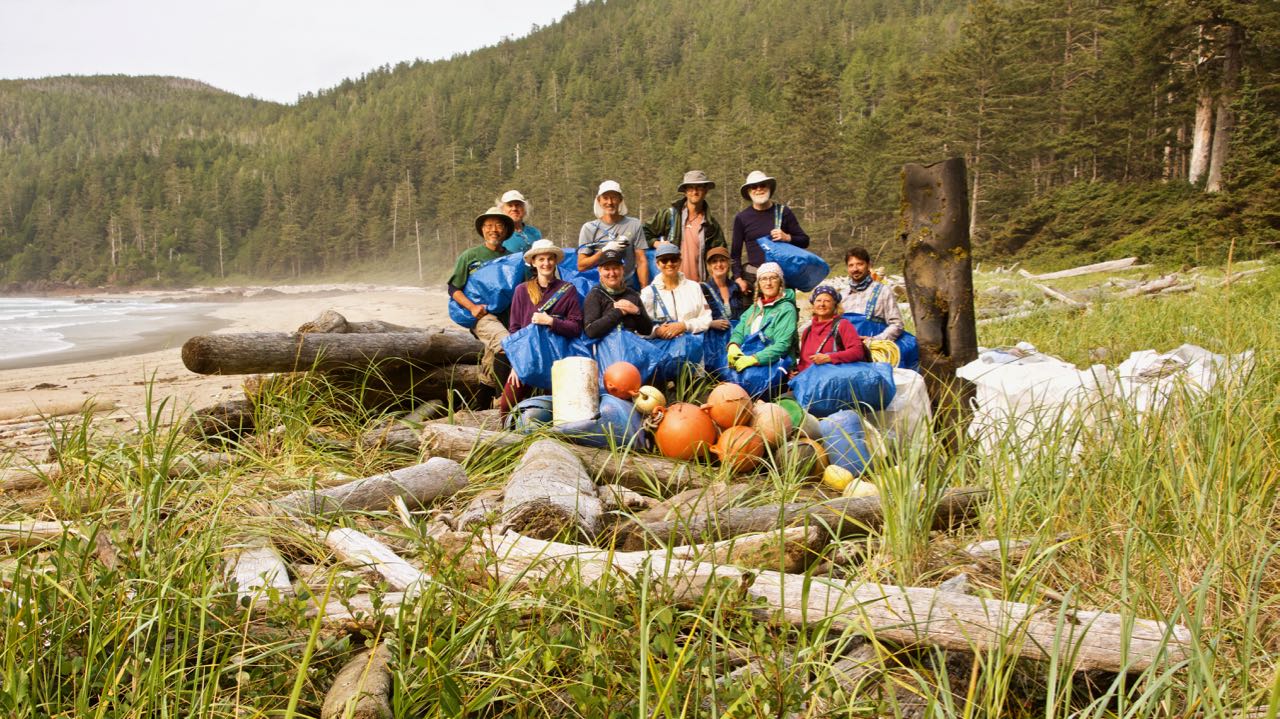 We welcomed a number of new volunteers and reunited with some who’ve been with us from the start of our West Coast Vancouver Island cleanups. In all, nearly 60 volunteers participated this year in cleanups organized or supported by Living Oceans. Still others have clearly been getting the message and hucking debris into piles above the tide-line, where it’s much easier for us to collect!  (If you folks could just leave it a little closer to the trailhead, we’d be obliged!) 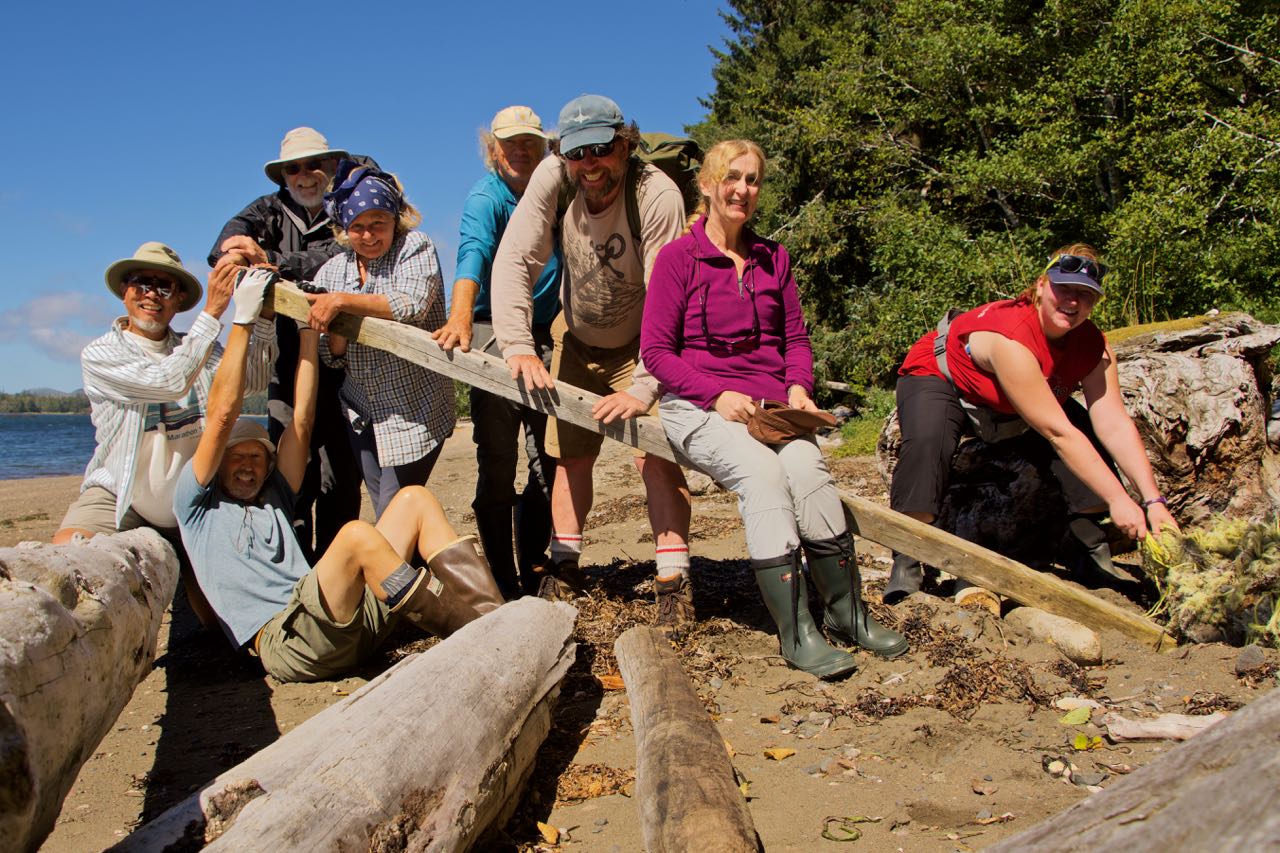 It was fun to see the awed expressions on the faces of late-season hikers when we descended from the helicopter at San Josef Bay parking lot earlier this month.  People who’d driven hours on the logging roads to spend a gloriously sunny day on San Jo’s white sand beaches instead set up viewing stations in the parking lot and watched us lift out over 60 cubic metres of marine debris. One vacationing couple even handed us a donation on the spot, thanking us profusely for our work to keep Vancouver Island’s northern beaches cleared of harmful plastics.

At the same time as we work to remove the plastics threatening wildlife, we’ve been working on developing policy in Ottawa to tackle the plastics problem head-on. With the help of M.P.s Joyce Murray (Lib) and Gord Johns (NDP), a non-partisan policy push was created that found favour in Cabinet.  This eventually led to Canada championing the Ocean Plastics Charter at the G7 meeting in Charlevoix, Quebec earlier this year.  Accepted by only 5 of the 7 nations, the Charter has been criticized because it provides for only voluntary measures and does not truly come to grips with either restricting use or increasing recycling. Still, Canada’s commitment includes a $100 million contribution to ‘ridding the oceans of global plastic pollution’. No further details on spending have been made available; nor has any money been offered by Canada to date to assist with removal of marine debris from our shores. 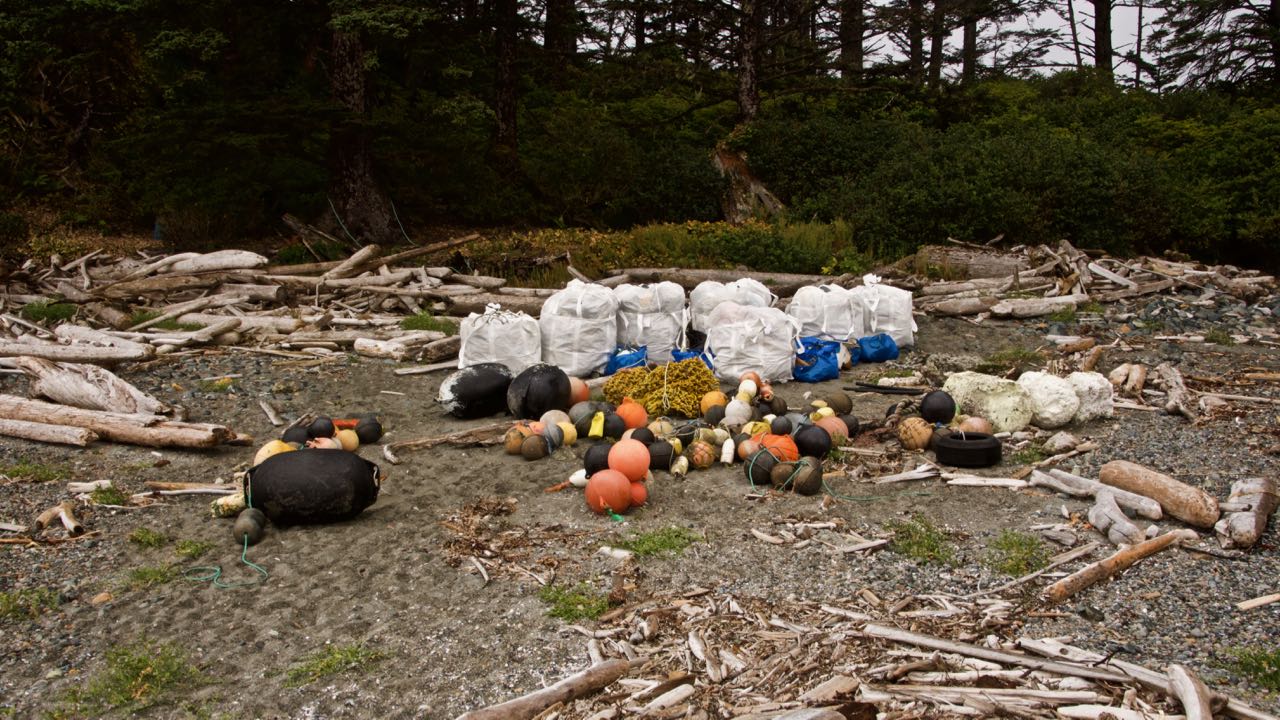 Living Oceans is working in collaboration with groups across Canada to deepen the commitment to tackling plastic pollution at source. In a letter to the Ministers of Environment and Health earlier this summer, the group asked that tools provided by the Canadian Environmental Protection Act be used to regulate single-use plastics, microplastics and plastic fibre. While the letter has been acknowledged, we are still waiting to hear if the particular mechanism under CEPA will be employed.

We had the opportunity to meet with Fisheries Minister Jonathan Wilkinson shortly after returning from this year’s Clear the Coast and alerted him to the fact that none of the funding programmes offered by his Department will fund marine debris removal. This was clearly news to him; we suggested he add some dedicated funding to the Coastal Restoration Fund for the purpose.

And we wait in hope… 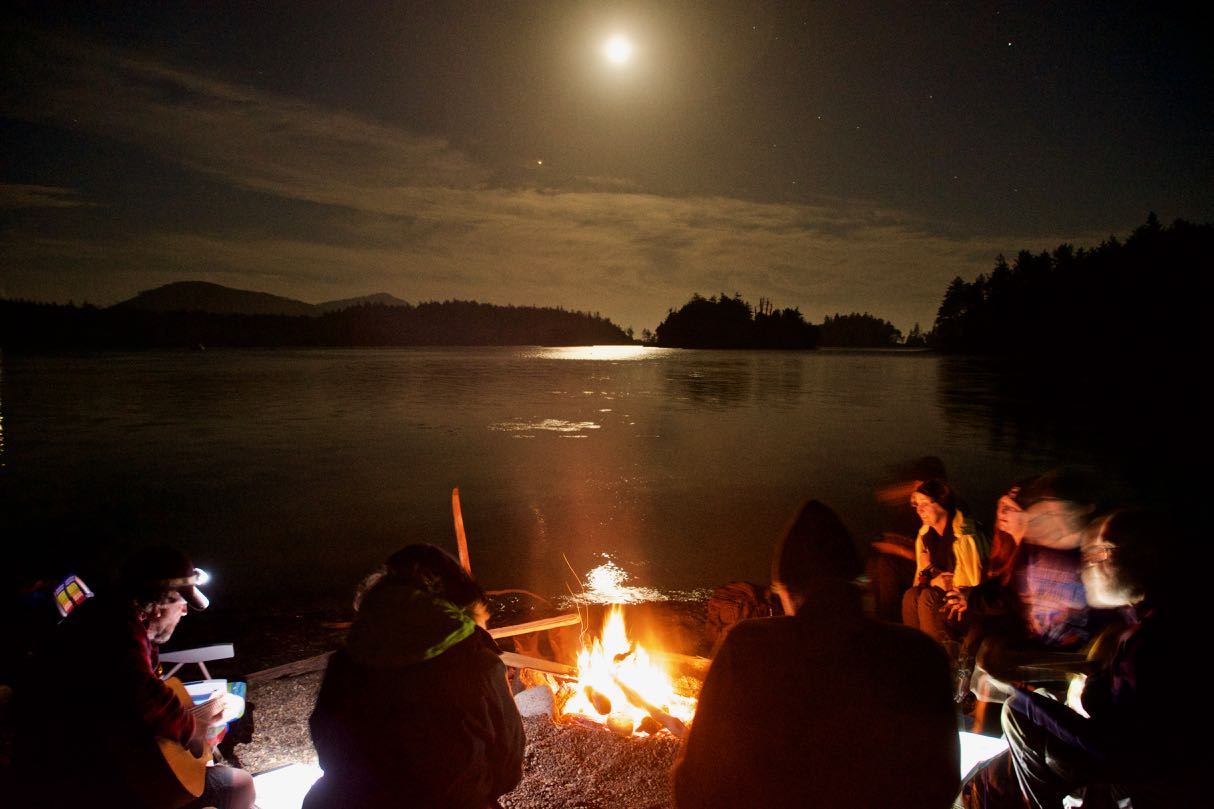 In the meantime, we must give a huge shout-out here to Lucy Graham and Matilde Gordon, two Australian women whose partnership, Passages Adventures, was created to plan and execute a paddle from Juneau to Victoria, to raise awareness about plastic marine debris. Provisioning their kayaks without using plastic and giving educational talks along the way, Lucy and Matilde also raised $10,000 for each of Living Oceans and The Tangaroa Blue Foundation. As if that weren’t enough, after kayaking all that way, they jumped in a car and went back up Island to help us clean up Raft Cove Provincial Park!

The main support for Clear the Coast has come from the Sitka Foundation and the Habitat Conservation Trust Fund, both of which have granted funds over multiple years. Nachiko and Ted Yokota supported us for the third year running with a very generous personal donation, for which we are most grateful.

Thanks also to Jeff Duke, whose start-up clothing company Lifestyle over Luxury contributes a percentage of sales to help us Clear the Coast. Jeff truly lives his philosophy and his philanthropy:  he joined us at Grant Bay for a weekend cleanup in July and shared some sweet company swag with the whole crew (best thermal water bottle I’ve ever had!).

IKEA provided the blue bags that are so helpful for carrying debris to consolidation points.

Our volunteers this year are too numerous to list here, but please know we are deeply indebted to you all.

As always, it was North Islanders who made sure the big moving parts of the job got done: Mike Aldersey at West Coast Helicopters did all our lifts for us at his most discounted rates; Dan Carter provided trucking services to Port Hardy at rates so favourable we’re sworn to secrecy. And when Dan’s trailer broke down after a good shaking on the logging roads, we had a first-hand experience of how folks help one another out in the remotest areas of the Island: our thanks to Christoff and Ken for being there with tools, tea and tales (and portable welding equipment—who’d have imagined you could conjure that up just where you needed it?). The Regional District of Mount Waddington waived tipping fees at the landfill and helped us recover all of our lift bags for reuse next year. And big thanks to Port Hardy’s Fox’s Disposal for waiving tipping fees for the debris we cleared off of Malcolm Island beaches during our World Oceans Day beach clean up last June!

And thank you to our excellent volunteer Charles Lam for sharing all these terrific photos from our expedition with us!