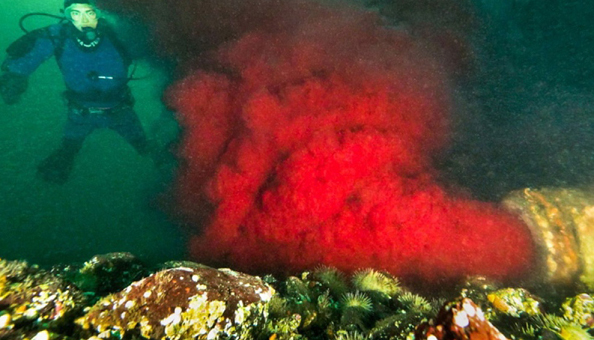 After the video and initial lab results were released publicly, the fish farming industry said that discharge from fish processing plants was disinfected prior to release to the environment. Statements from both the B.C. Salmon Farmers’ Association and Brown’s Bay Packing Co. Ltd. cast doubt on the lab reports and on the people involved in sampling and testing. The news from the government’s tests makes it clear that the discharge was not disinfected.

“The levels of enterococcus were so high that they couldn’t be counted accurately,” said Karen Wristen, Executive Director. “The lab reported them at over 60,000 bacteria per 100 ml of effluent. For comparison, the safe level for recreational waters is less than 70 bacteria per 100 ml.”

Documents on file with the B.C. government indicate that the Brown’s Bay plant is indeed equipped with a chlorination facility, but it has a bypass valve. Chlorine would have inactivated both enterococcus and PRV. Alexandra Morton of Raincoast Research Society, who viewed Tavish’s initial samples, said they contained live intestinal worms and that the virus was later cultured in the lab, meaning it was alive when sampled and able to infect other fish.

It is difficult to put the lab results into perspective, since we don’t know how high the levels of these pathogens are after dilution in the waters of Brown’s Bay or near the plant in Tofino. Levels this high really require testing of the local waters on a priority basis to understand the risk to human health and the marine environment.

It is presently unknown why the levels of enterococcus were so high in the processing plant waste. It is common practice to starve fish for several days before slaughter, so that their guts will be empty. A DFO webpage entitled “Thinking Out of the Box: Exploring Strategies to Reduce Sea Lice Infestations in Salmon Farms1” dated 2017-01-19 reports that DFO has been exploring since 2013 the use of beneficial bacteria added to feed to increase resistance to sea lice, but there is no publicly available information about the content of feeds currently in use. Samples taken from the well of a boat used to transport fish to Lions Gate also tested positive for enterococcus, but the levels (690 CFU/100 ml) were orders of magnitude lower than the levels at the plants.

Alex Morton has asked the Ministry of the Environment to look into the potential for danger to human health and the marine environment arising from this bloodwater. However, the most urgent concern is, now that government knows about this plume of PRV-infected bloodwater, are they going to allow another generation of Fraser River salmon to swim through it starting in a few weeks?