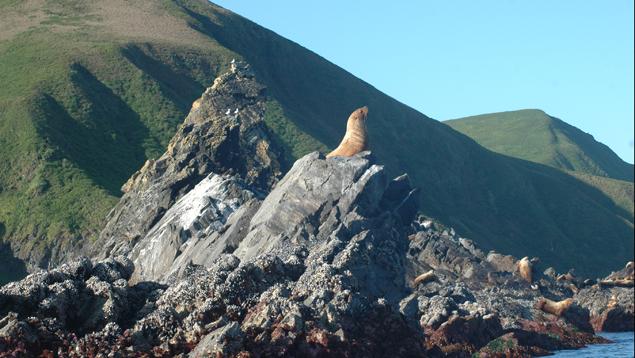 Just off northwest tip of Vancouver Island, a chain of five unique islands jut dramatically from the cold depths of the North Pacific Ocean. These islands, Triangle, Sartine, Baresford, Lanz and Cox are collectively known as the Scott Islands. As any local mariner will attest to, this archipelago is home to some of the most treacherous waters on the B.C. coast and is ceaselessly battered by storms all winter long. 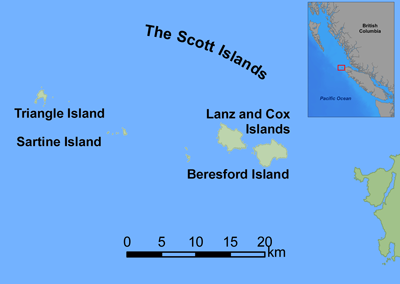 Between March and September however, these same islands are also home to a spectacular diversity of wildlife, including very important colonies of sea lions and seabirds. In fact, over two million seabirds live on the Scott Islands at certain times of the year, making the islands a nationally and internationally Important Bird Area.

More than half of the world's population of Cassin's auklets nest on the islands, as well as significant numbers of rhinoceros auklets and charismatic tufted puffins. In turn, these seabirds are preyed upon by several pairs of Peregrine falcons and bald eagles that also call these islands home.

Although the land portion of the Scott Islands were protected through the establishment of a Provincial Park and several Ecological Reserves, the waters around the islands remain at risk. The Canadian Wildlife Service (CWS) is working with local First Nations to establish a marine National Wildlife Area (NWA) that would protect these critical feeding areas, in consultation with Living Oceans Society, other conservationists, local and provincial government, and the marine industries in the area.

The nesting seabirds on the Scott Islands face many threats and there are years when they are unable to feed their chicks properly. The seabirds arrive in the summer because currents from the deep bring cold, nutrient rich waters to the surface fuelling a rich food web. The waters teem with herring, sandlance and other small forage fish. But climate change is causing ocean temperatures to rise. The sea surface temperature off the coast of British Columbia has been warmer than normal for the past 20 years and the fish are moving to colder waters further out to sea, or deeper on the continental shelf. This means that the seabirds must travel farther and use more energy to find food.

Establishing an NWA in these waters will increase the resiliency of the seabirds and the rest of the food web. A protected area could also reduce other threats to seabird survival, such as the impacts of the commercial fishing industry, oil spills and pollution that comes from nesting near a busy shipping route.