In June 2009, Living Oceans Society led the Finding Coral Expedition, a journey to the bottom of the sea on Canada’s Pacific coast in search of deep sea corals. Using one person submarines, a team of international scientists made 30 dives to depths of over 500 metres and saw giant coral forests, darting schools of fish, and a seafloor carpeted in brittle stars. This research trip was the culmination of five years of work to secure protection for these slow-growing and long-lived animals, which provide critical habitat for fish and other marine creatures that live in the deep corners of our ocean.

The Finding Coral Expedition is the first of its kind in British Columbia: an expedition specifically designed to study deep water corals and document threats to their well being. We mounted the expedition as part of our efforts to get the Canadian Government to protect B.C.’s deep sea corals from destructive fishing practices such as bottom trawling. The federal government has created "The Pacific Region Cold Water Coral and Sponge Conservation Strategy" outlining the coral importance and their location to help with their conservation. However, there are currently no specific measures in place to protect deep sea corals.

Fisheries and Oceans Canada (DFO) have said they need more information before they can implement a coral protection strategy because there are insufficient data about corals, their location, and the species that depend on them. We hope that the Finding Coral Expedition is able to help to shed some light on those issues.

We found coral at all seven of the expedition's dive sites. We observed approximately 14 different kinds of coral, ranging from small solitary stony cup corals to large colonies of red tree coral (Primnoa pacifica), some of which measured over one metre high and two metres wide. The coral often grew in dense groves that abounded with fish and invertebrate life. We also observed over 40 species of fish and numerous invertebrates, some of which were found resting on or near corals. 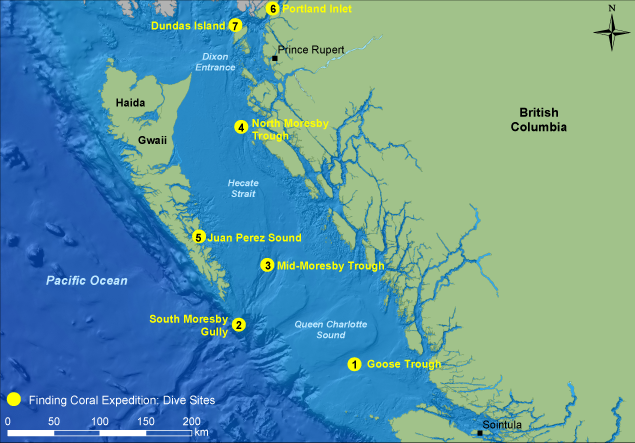