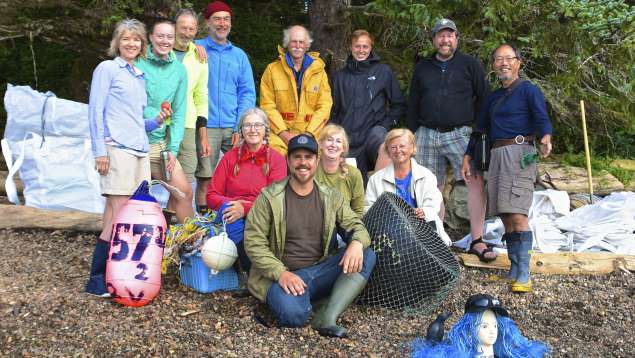 Successful End to 2106 Clear the Coast

Our cleanup on the northwest coast of Vancouver Island was a roaring success: we bagged an estimated 10 tonnes of debris!

Our crew was determined to go farther and get more; they doubled our recovery rate from last year!  There were two base camps this year: one right at Cape Scott that worked on Guise Bay and Experiment Bight and our 'usual' location in Sea Otter Cove, where Paul Ross moored the sailboat Samphire next to Executive Director Karen Wristen's Viajador. The two vessels provided transportation, accommodation and food storage throughout the trip.

We did a few other things differently: knowing we would sort the debris after transport, we didn't fuss with the bagging quite so much and concentrated instead on covering more ground. We used more efficient, shore-based camps to feed everyone, that allowed us to cook up some amazing meals and still get everyone off to work early in the morning. We divided into teams and cleaned several beach areas each day, watching the weather for conditions that would let us travel farther from home base and staying close by when it was blowing.  And it did blow! We were lucky that both support vessels were able to get in and out of Sea Otter Cove in excellent conditions, because in between, we had gale force winds.

And we weren't the only ones at work!  Colleagues in the Vancouver Island Marine Debris Working Group pulled out all the stops this year to make sure we collected the maximum amount possible, to make it economical to move all that debris by tug and barge. All along the Island's West Coast, they stacked caches of debris. In all, we lifted more than 300 lift bags plus an equal volume of netbags and strings of larger, heavier materials. Our lift crew (Living Oceans' Rob O'Dea and from BC Marine Trails, Ron Perrier and Ted Oldham) worked with 49 North Helicopters to lift loads onto a barge supplied by West Coast Tug and Barge.

By the time we were done, we had 40 tonnes on board.

Most of the debris by far was plastic. Styrofoam from floats and docks made up the largest proportion by volume; next would be plastic drink bottles.  We collected an estimated 10,000 of those. There were also fishing floats by the thousands, in every shape, size and colour you can imagine.  Rope and net, hopelessly tangled in bundles, filled 17 cubic-metre bags.

We couldn't keep putting these high-volume plastics into Vancouver Island's relatively small landfills. So we hatched a plan to bring it all to the Lower Mainland where there are more recycling facilities. River Road Barge and Transfer donated space to land the barge and sort the plastics for recycling. They also provided the equipment and labour to unload the barge, working well into the wee hours to let us send the barge on its way (thanks to Phil Hewlett and Jim Maclean).  Sunbelt Rentals loaned us a forklift that proved indispensible, as some of those bags weighed up to 400 lb!  River Road owners Phil and Shirly Hewlett were most gracious hosts, making sure everyone had what they needed to get the job done.

We invited the public to come and help sort and to take home any treasures they might find. Over 80 people turned out for the sorting weekend, making it a huge success. Truckloads of treasures were spirited away; and FedEx helped out by taking several truckloads to recycling facilities and the Vancouver Landfill. FedEx also provided a team of volunteers and a generous grant.

When all was said and done, 11.2 tonnes went to the landfill and the rest was repurposed or recycled.  That's a 72% diversion rate, far better than we'd been able to achieve with the facilities available to us on the North Island. Two main recycling opportunities made a huge difference here: we could send the hard plastics to one of several dealers who resell to plastics reprocessors; and Foam Only accepted all the Styrofoam that wasn't too horribly wet or dirty.

At the end of the day, though, we still had to order in dumpsters and send 4-40 yard bins to landfill. Many thanks go to the Vancouver Landfill in Delta for accepting the debris free of tipping fees.

We're immensely grateful to our volunteers for their hard work during our summer 2016 cleanup and to all of you who supported this work with donations, advice or in-kind contributions.

Partial funding for Clear the Coast was provided this year by a generous contribution from the Government of Japan and its people and supported by the Province of British Columbia, Ministry of Environment and the Government of Canada. Living Oceans is also grateful for funding assistance from the Sitka Foundation, the Habitat Conservation Trust Fund’s Public Conservation Assistance Fund, the B.C. Parks Enhancement Fund, Canadian Wildlife Service, FedEx Corporation and our fabulous supporters. Online startups Lifestyle Over Luxury and Ekoco each contributed a portion of sales. In kind support from Steveston Harbour Authority was key to making the project work, as was the help of Western Forest Products whose staff carried collection bags to beaches from Cape Palmerston to Grant Bay so that visitors could help us Clear the Coast. In kind donations: River Road Tug and Barge provided services and facilities free of charge; Jim Maclean helped offload the barge; Sunbelt Rentals loaned a forklift; Fabwell Industries and Gulzar Transport let our volunteers use their parking lot;Phil and Shirly Hewlett, Tim Horton's and McDonalds provided coffee and treats. The Vancouver Landfill waived tipping fees. All of our service providers, below, offered their services at reduced rates to help us with this important work.