At Living Oceans, we’re not accustomed to receiving Christmas presents from the Minister of Fisheries. But on December 17, 2020, we were delighted to hear Minister Bernadette Jordan declare that the Wild Salmon Narrows will once again be free and safe passage for wild salmon. We’ve been asking for this for over a decade. 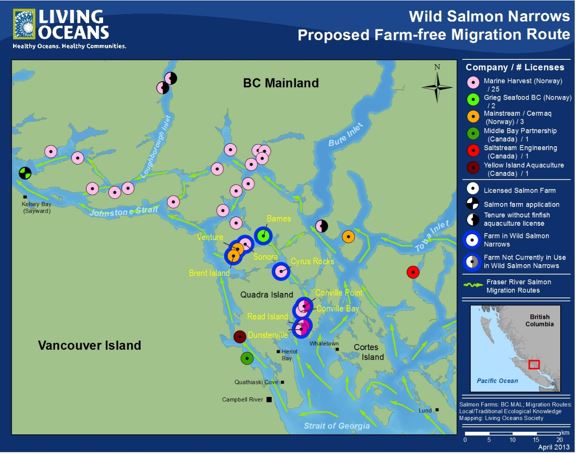 We are sincerely grateful to the First Nations of the Discovery Islands area for exercising their indigenous rights and title over traditional territories to make this happen.  The Minister’s decision was announced in the context of a step toward reconciliation, which is no doubt true; although we know that the Nations based their objections to the farms in sound scientific criticism of the unresolved impacts of the farms on salmon and other fisheries resources in their territories.  Living Oceans was pleased to play a small role in assisting with the brief.

The Discovery Islands farms will be closed down by June 30, 2022, which gives the industry time to grow out fish already in the water there. The Minister’s announcement expressly forbade any more fish from being placed into these farms after December 17, meaning that most of the route will be free of Atlantic salmon and their associated lice and pathogens before the Fraser River sockeye migration begins in late spring this year.

The Fraser River stocks need all the help they can get in 2021. The juveniles going to sea this year are the offspring of adults that returned to the Fraser in 2019.  At that time, the return was described as ‘the worst in history’.  It only got worse in 2020.  For the next two years at least, it is critical that every threat to the survival of outmigrating salmon is reduced to the utmost of our ability.

Predictably, industry is fighting back in the courts of both law and public opinion.

Applications for judicial review of the Minister’s decision and for an injunction to delay its implementation (read: a free pass to put more Atlantic salmon into the Discovery Islands farms) were filed in January. We expect the injunction applications to come before the courts quite soon, to enable companies to restock the farms. The full review of the Minister’s decision could take much longer.

In the court of public opinion, industry has taken the unusual step of portraying itself as the hapless victim ‘blindsided’ by an uncaring government pandering to ‘special interests’.  We readily acknowledge that job losses and fear for the future are real and painful for the workers involved; but the orchestrated parade of fear and grief served up in high-quality video productions by the industry lobby group makes it hard to distinguish the real impacts from the public relations sound bites.

In truth, based on court filings by the companies, we calculate about 200 direct jobs that might be lost over the course of the next two years as a result of the Minister’s decision. There will be some spin-off losses from that, for sure; and our sympathies lie with every one of those who will need to seek alternate employment. The good news is that, if the government can provide the right incentives to move it forward, the land-based closed containment industry will provide nearly 1500 permanent, high-paid jobs in Campbell River; and over 4000 construction jobs during the time it takes to build the plant.  But it’s imperative that the government should move on this quickly, before we lose the valuable human resources and corporate infrastructure that will support a land-based industry here in B.C.