Living Ocean’s contention that the federal government is failing to live up to its international commitments on effective marine protected areas was supported by a report released in March by the Auditor General’s Commissioner of the Environment and Sustainable Development. 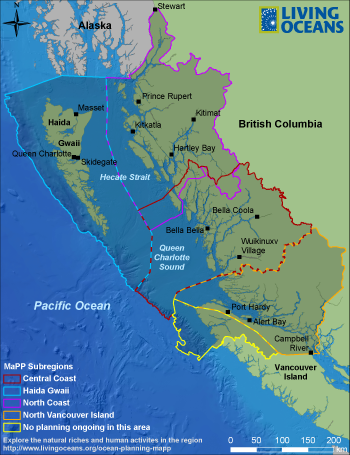 The Auditor General recommends that planning for ocean protection needs to include finding compatible economic opportunities and speaks to the ecological and economic benefits to be gained from a healthy ocean. It also reminds Canadians that our oceans are in serious decline with industrial activities taking their toll, a sad fact reflected in the health of our oceans and coastal economies. For example, the quantity of Canada’s fisheries catches in 2009 was 41 percent less than the peak harvests of the late 1980s and the landed values were among the lowest on record.

Living Oceans believes the solution lies in marine planning. That is why we are involved in advisory committees with the B.C. Government and over 20 coastal First Nations on their Marine Planning Partnership (MaPP) for the North Pacific coast. These committees are also made up of ocean-based businesses and regional district governments. If done correctly, MaPP will ensure that the impacts of ocean-based industries are managed within thresholds that conserve the integrity of the ocean environment. MaPP will seek public input on their draft plans later this year.

“One of the downsides to the MaPP process is the lack of federal involvement,” says Kim Wright, Marine Planning and Protected Areas Director. “It’s been a challenge for industries that are federally regulated because their activites can’t be taken into account in the marine plans. Over the past year we’ve travelled to Ottawa several times to try to find ways to convince the government to implement marine planning but without any success.”

Fisheries and Oceans Canada's (DFO) response to the Auditor General’s criticism that a national plan for achieving protection is incomplete stated that “developing and implementing such a national plan will take decades under current funding levels.” This is not good enough and Harper’s 2013 budget suggests these commitments will not be met anytime soon.